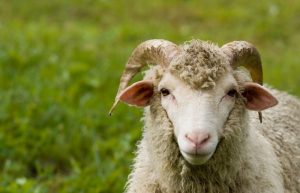 What is a Wether Sheep?

If you’re interested in jumping into the world of sheep, it’s important to know specific terminology so that you can purchase the sheep you want and determine how you will make a profit from the livestock. There are many different things sheep can be raised for, from wool and meat to breeding and land management.

What is a wether sheep? A wether sheep is a male sheep that has been castrated, usually at a younger age. Rams can be castrated before maturity to keep them from becoming aggressive. Wethers can also live with ewes, which can make it easier to manage your flock of sheep.

What’s the Difference Between a Ram and a Wether?

While the main difference between rams and wethers is the ability to reproduce, there are other differences, both physically and behavioral, that vary depending on sheep. Below, I list the common attributes of both rams and wethers:

the definition of a ram is an adult male sheep with the ability to reproduce. This means they are intact and can be used for breeding. Here are characteristics of rams that will differ from wether sheep:

Wether sheep are male sheep that can not reproduce due to castration. Wethers are usually castrated when they are just a few days old. Here is how wethers are different from rams:

Before you get a ram or wether, it’s important to have an idea of what you want to use your sheep for. Each type of sheep brings its own benefits. Keep reading to learn the benefits of having wether sheep.

Why Should I Get Wether Sheep?

While initially there may not seem to be a good reason to get wether sheep, there are many benefits to having wethers rather than rams and even ewes. Here are popular reasons to invest in wether sheep.

Intact male livestock are more likely to be difficult to handle, dominant, and even aggressive towards both other animals and humans. The reason for this is that their bodies produce higher levels of testosterone. If you plan on breeding your sheep, having a ram around is a good idea; however, if this isn’t what you plan on using your sheep for, having a ram can make for more difficult flock management.

When you castrate a ram and make it a wether sheep, the wether will produce lower levels of testosterone, generally making them easier to handle and less-dominant. Whether sheep can live quietly with ewe sheep and other animals and tend to be lower on the pecking order in any flock they’re in. Wether sheep can also make great pets due to their gentle and docile nature.

If you plan on having rams to breed to ewes, just know that your flock and sheep will require more management. Rams will need to be kept separated from the flock if it’s not breeding season, as they can be aggressive and dominant. It’s also not good to keep any sheep alone, so you’ll need to provide the ram with a companion. (to learn more, read Can You Keep a Sheep By Itself? Essential Guide)

Sometimes, you may be able to keep a few rams in together so that they can have company and a flock community; however, rams may fight and injure each other as they try and establish the hierarchy within their group. One way you can avoid this is by using a wether sheep for a companion instead of another ram. Wethers will automatically be lower in the pecking order, so there won’t usually be much fighting. Although, if you do notice that your ram is being aggressive with your wether, the safest thing to do is remove the wether from the situation.

Wether Sheep Can Live With Ewes When you have to juggle separating your ewes from your rams, you’ll have to spend more time on flock management and you’ll need to use more land and resources to keep the animals separate. One way you can keep your flock together and save on space is to castrate male lambs to become wethers.

Wethers can live alongside ewes and lambs. While there may not be much use for them if you’re running a breeding operation, they can still be used to produce wool, to show, to be sold for meat or for pets, and to be used to manage the land. Since wethers can run with ewes, you don’t have to worry about keeping the different genders separate.

Whether Sheep Can Be Used for Land Management

Sheep, in general, are great to use for land management. Many people will even purchase the smaller sheep breeds, like babydoll sheep, to maintain yards and gardens. (Want to know more about babydoll sheep? Check out my article How Big Do Babydoll Sheep Get? What You Need to Know) Sheep will keep grass manageable, eat away weeds, and trim back bushes. Sheep are even becoming a commercial method for land maintenance, as more and more farmers offer the flocks up for rent.

Just because wether sheep can’t produce doesn’t mean they are worthless. You can use them to maintain your land or even rent out a flock of them to maintain other people’s land. Sheep are low-maintenance and not as destructive as goats, which makes them a popular choice for small farmers, homesteaders, and commercial operations.

One of the most popular sheep products is wool. Certain sheep breeds grow a thick wool fleece and, which is removed each spring when the sheep are shorn. From there, wool can be used to make yarn and clothing. If you want to raise your sheep for wool, wether sheep produce a thick quality wool fleece just as well as ewes.

Wether wool sheep can produce an average of 10 lbs of wool per year. Once the wool has been removed from the sheep, it is cleaned, treated, and dyed to be used as a product. Wool sheep can often produce a quality wool coat for up to 10 years, and will require shearing every spring to maintain hygiene. The docile nature of a wether sheep can also make them easier to deal with during the shearing season.

Whether Sheep Can Be Used for Meat

While wether sheep may not have the muscle mass that rams have, wether sheep can be used for meat. If you breed sheep to be used for mutton, the sheep will need to mature before being sent to slaughter. Ram lambs will be castrated so that they can be easier to handle and easier to manage as they grow. Many consumers may even prefer wether meat compared to meat from a ram since the ram meat could be tainted by certain hormones.

Often times, sheep to be slaughtered for mutton mature for 1-3 years before being sent to slaughter. Wool sheep may also be sent for meat production after their wool quality starts to decrease. Meat production is one of the most common uses for sheep in the United States.

What to Know About Castrating Sheep

If you want wether sheep, it’s important to know the best practices for castrating lambs. The best thing to do is to castrate male lambs before they hit maturity and start producing more testosterone. If you castrate an adult ram, they still may have aggressive and dominant tendencies.

When Should You Castrate Sheep?

The ideal time to castrate sheep is when they are 1 – 7 days old when they are immature and less affected by pain. There are pain management steps you can take to keep your lambs comfortable, like injecting Lignocaine or applying a clamp.

How Do You Castrate Sheep?

The most common way to castrate a sheep is to put tight rubber bands above the testes, which will cut off the blood supply, causing them to eventually die and fall off. This is called banding. Other castration techniques include surgical castration and emasculatome, which is when the spermatic cords are crushed using a specific tool called a baby Burdizzo.

Whether or not your sheep grows horns is largely determined by the breed of sheep you have. In some sheep breeds, neither males nor females will grow horns. Certain breeds will only see males grow horns, and other breeds will have both male and female growing horns. 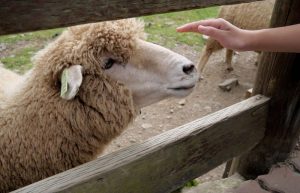 Sheep, in general, are known to make great pets. Sheep are often sweet and docile, being popular not only as backyard pets and barnyard friends but also as a signature petting zoo animal. Rarely do ewes and wethers exhibit dangerous or aggressive behavior towards humans; rather, they are known to be friendly and expressive.

If you want to get a sheep as a pet, it’s highly recommended that you stick to getting ewes or wether sheep. The reason for this is that ewes and wethers are typically more docile and easier to handle compared to rams. They are low maintenance and rarely challenge fencing.

If you’re looking for a low maintenance outdoor pet, hair sheep will be your best choice. Hair sheep don’t produce a wool fleece, so they don’t need to be sheared once a year. They can also have better hygiene than wool sheep since they don’t have the thick fleece to trap dirt, moisture, and bacteria.

Other Sheep Terminology You Need to Know

Besides wether, there are many other terms used that are specific to sheep. If you plan on purchasing and raising sheep, it’s a good idea to have an understanding of words and their meanings. Here is a list of common sheep terminology you should know:

Buck: an unofficial term to describe an intact male sheep

Dam: a female sheep that has given birth to a lamb; this term is used to describe the ewe as a mother

Flock: a group of usually more than five sheep; a community of sheep that provides security and protection from predators and other threats

Hair Sheep: sheep that have a coat of hair rather than wool fleece

Mutton: meat produced by a sheep over one year of age

Ram Lamb: an intact male lamb younger than one year of age

Sire: a male sheep that has produced lambs; this term is used to describe the ram as a father

Yearling: a sheep between one to two years of age

I hope you found this article helpful in learning about wether sheep. I have many articles dedicated to providing information regarding the care of sheep and other livestock. To read more, check out the articles below!