Have you ever seen your goats running into each other’s heads horns-first? The sight and sound of the horns slamming into each other can be a little unnerving the first time you hear it. Some people could feel the need to intervene before a goat headbutting fight goes too far. But it is a normal part of goat social interaction, and unless one animal becomes injured and is unable to defend itself, you should leave them to it.

So, why do goats headbutt? Goats headbutt to assert dominance and settle disputes. It is a normal part of their social interaction with one another. It’s how they establish a pecking order to determine who gets the choicest of feeding and sleeping spots. When a new goat joins the herd, it must do a lot of headbutting to determine its place in the hierarchy. During breeding season, males challenge each other for the chance to breed with females. 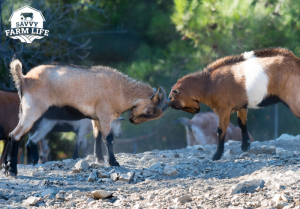 When goats headbutt each other, the process usually involves some glaring, charging, and sometimes swerving one way or another before actual contact is made. Then the horns collide and the goats fight it out. Usually one altercation will involve multiple events of headbutting.

While this is a normal part of goat behavior that should be allowed to play out as much as possible, it is best to separate animals if injuries occur. Some animals may need to be permanently separated to prevent continued dangerous fights.

Because of the harsh environments goats naturally inhabit, they need to stick together to keep as safe as possible from predators. But living in close quarters with so many others will inevitably result in disagreements.

Rather than injuring each other and reducing their numbers over food and other resources, goats are able to headbutt without causing harm (most of the time) to determine who is the strongest. The weaker animal accepts his lower place, at least for the time being, and the dispute is solved.

This is a tried and true way to decide who’s the head male of the herd, who gets to pass on their genes, and who gets to eat first without causing any permanent harm to herd members.

How To Stop Goats from Headbutting Each Other

If one goat is bullying all the others to the extent that injuries are involved, then it may be best to remove that animal from the herd. In general, males should be kept separate from females unless it’s breeding season.

If several goats are picking on one lone goat, you may need to consider adding additional feeding stations and/or visual barriers throughout the enclosure. Adding more feeding opportunities will make the bullied goat feel more comfortable eating at a food station that isn’t owned and monitored by a bigger, more dominant animal.

Visual barriers will be even more helpful in this area as the more opportunities there are for the intimidated goat to be out of the eyesight of a more dominant goat, the happier everyone will be.

Stop Goats from Headbutting You Goats can cause some serious damage headbutting people. After all, we don’t come equipped with a set of rock-hard horns to defend ourselves with. Even one hit from those horns will cause bruising at the very least and could have the potential to cause internal damage. The pointy end can also cause deep wounds if struck through skin.

To discourage your goats from headbutting you, be stern and decisive. Do not show fear. Shout a loud “No!” at the offending goat. You may add a smack to the head or horns as further indication that this is not an acceptable behavior. Keep in mind that goats have hard enough heads to headbutt each other’s horns, so you won’t hurt them with a smack. They’re far more likely to hurt you with another headbutt.

How To Stop Goats from Headbutting Objects

Headbutting random objects is part of investigating their surroundings. But it can be more destructive than necessary at times.

The easiest way to prevent things that shouldn’t be destroyed from being destroyed is to simply remove them from the goat’s environment. If that is not possible, perhaps because the object is a shed wall or a fence post, consider reinforcing the structure or adding additional fencing to stop the animal’s access to it.

Goats can often be seen pawing at the ground with their front hooves. This is a normal goat behavior and as long as they’re doing it in their pasture and not your garden, it’s a totally acceptable thing to do. Pawing is one way goats learn about their environments. They investigate what things are hard or soft, movable, climbable, etc.

Sometimes goats paw at the ground to scrape out a cool place to lay down and rest in. They may also paw at items to indicate that they need things. Such as pawing at an empty food bowl to indicate that they are hungry and out of food, or an empty or dirty water bowl to ask for clean water. A pregnant female who is close to giving birth may paw at the ground in discomfort or anxiety as she gets closer to giving birth.

A possible negative reason for pawing is pain in the leg or hoof they are pawing with. Or if they paw at themselves in an unusual way different from how they normally scratch an itch, then there could be a health concern in the area they are pawing at.

Stomping is another normal goat behavior. It usually indicates that a goat is annoyed with others nearby, and it can be followed by a headbutting match. Goats also stomp at predators to try to scare them off and to alert other members of their herd that there are predators nearby.

Like pawing, stomping can also be a sign of a health issue. If a goat is being bitten by insects such as ants, mosquitos, or lice, they may stomp to try to shake off the pests and get relief from the pain.

Goats sometimes mouth things to investigate them. Things such as other goats, humans, and inanimate objects. Since they don’t have upper incisors, their bites don’t hurt as bad as they could.

To stop a goat from biting, spraying them with water usually does the trick.

Whatever behaviors your goats are doing, you can take action to either remove the opportunity or motivation of the behavior, or train your goats not to do it anymore.