We are all familiar with the quintessential black and white Holstein, but there is another color combination that dominates several markets – and that is brown and white. There are several cattle breeds that are predominantly brown and white, and if you haven’t seen any, they are definitely worth checking out.

If you are looking for a brown and white cow as an alternative to the classic black and white or the common solid color, you will want to research the following breeds further. Some of them are used for beef, some are used for milk, and all of them are beautiful. Behind only the Black Angus, the Hereford is the second most popular breed of cattle in the United States, and is used primarily for beef production. They have reddish-brown backs and sides, with white heads and bellies. The legs can be reddish-brown, white, or a bit of both. Herefords reach mature weights of 1,200-1,800 pounds and are known for their breeding longevity and their hardiness. Hereford cattle thrive well in cold climates, hot and arid climates, humid climates, as well as in regions with scarce or poor pasture.

The Hereford was developed in the 1700’s in Herefordshire, England. At the time, there was no breed of cattle that could efficiently put on enough weight to be profitable on the poor-quality native grass.

The Hereford quickly grew in popularity and was imported to the United States in the early 1800’s. While an 1,800-pound steer may sound large (and it is), up until the early 1900’s the standard Hereford was actually closer to 3,000 pounds. Tastes changed around this time from fatty beef to red, lean beef, which is when the Hereford began the transition to a more manageable, though still beefy, size. The Texas Longhorn is the oldest breed of cattle in the United States, and is the only breed that has been designed through no human intervention at all. It is from the Texas Longhorn that most US cattle genetics have benefited from, and there are still several breeders dedicated to pure Texas Longhorn in the country.

The Texas Longhorn is known for its impressive (long) horns and its beautiful coloring. The cattle can be a combination of almost any color out there, including gray, yellow, red, brown, black, and white. They can come in splashes of color or mottled combinations. One particularly striking combination is the mottled brown and white, or red and white, coat.

The Texas Longhorn is more than its good looks however. Being native to North America, they are exceptionally resistant to parasites and able to thrive on native grasses and other forage. They are also known to have excellent-tasting lean meat, with their beef having a lower cholesterol count than even chicken breast. 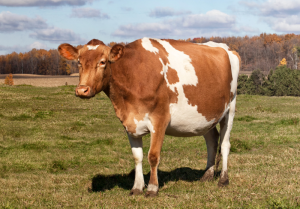 An old breed from England, the Guernsey was first imported into the United States in the 1830’s. This dairy breed is known as the “Golden Guernsey”, a nickname given for the rich yellow milk that she produces. Guernsey milk is high in beta-carotene, butterfat, and protein. In fact, Guernsey milk contains 12% more protein, 30% more cream, 33% more vitamin D, 25% more vitamin A, and 15% more calcium than the milk of other popular dairy cows.

Guernsey cattle are brown, fawn, or red with white patches. They are especially efficient at converting feed to milk, and reach reproductive maturity at a comparatively young age. They are docile, gentle, and easy to care for. The Ayrshire is a breed native to Scotland, and is predominantly found in the mottled brown and white coloring. Ayrshires are naturally horned, but for the convenience of modern operations, most calves are dehorned shortly after birth.

Ayrshires were first imported into North America in the early 1800’s and quickly became known as the dairy cow that provides “the ideal drinking milk”. The breed earned this nickname for its smooth milk that is not excessively rich, containing adequate fat and protein.

Ayrshires are a hardy breed and able to thrive in harsh conditions and on poor quality forage. This is one of the qualities that makes the breed an attractive dairy cow, while bull calves can be raised profitably as steers due to the lack of yellow tallow present in many dairy breeds. The Belted Galloway is so named for the contrasting thick band of white hair at its midsection. While the band of the Belted Galloway is always white, the rest of the body can carry a variety of solid colors – most commonly black, but also dark brown, red, and dun. They have curly or wavy hair, making them an ideal breed for Northern climates, though they can also thrive in warmer climates as the thick coat will shed in the Summer.

Belted Galloways are a beef breed, and can reach a mature weight of up to 2,000 pounds, though there is also a growing market for “mini-Belted Galloways”. Proponents of the breed claim the Belted Galloway has fewer incidences of pink eye, parasitic infections, and foot problems than other breeds. The Scottish Highland is the trendy long-haired breed of cattle that adorn many paintings and other home decor. They have attractive horns and a long fringe that covers the eyes. While they are not commonly found in color combinations, they come in a variety of solid colors including black, brindled, red, yellow, cream, and dun. They are primarily used for beef, and can thrive in a variety of climates (despite the long hair). The Charolais does not typically come in a variety of color markings, but instead is mainly found in a solid white, with an increasing breeding of solid red and solid black as well. They were initially bred for draft purposes, but are now used for beef production – they are also popularly used for crossbreeding to increase muscularity and growth in other breeds. The Brown Swiss is recognized as the oldest of all dairy breeds, as well as the second most popular dairy breed in the world. They are excellent producers of milk and cheese thanks to the best fat-to-protein ratio of milking breeds and the high volume of milk produced. This breed is most often found in a light brown coloring with a cream-colored muzzle.

In addition to the attractive coloring, they have dark blue eyes, giving them an especially striking appearance. Like most successful dairy breeds, they are quiet and docile in nature, and easy to handle. Holsteins are, without question, the number one dairy breed in the world. In the United States alone, over 90% of the nine million dairy cows are Holsteins. The Holstein cow can produce an astounding nine gallons of milk every day. These are the classic black and white cows that we picture when thinking “dairy cattle”. The Milking Shorthorn (also called the Dairy Shorthorn) is, as its name implies, raised for its milk production. Milking Shorthorns are known for their volume of high-fat milk (and thus their contribution to the cheese market), their adaptability, and their breeding longevity.

They can be found in red and white, solid red, solid white, or a unique red-white roan that is found in no other breed of cattle. The Milking Shorthorn has been used extensively in crossbreeding and has contributed to the genetics of over forty other cattle breeds.

There Is More To Cows Than The Black-and-White

While there is no competition for the milking capabilities of the traditional black and white Holstein (also available in red and white!), there is a lot more variation of color in the world of cattle than this combination. If you are looking for a uniquely mottled brown and white cow, look into the Milking Shorthorn, Ayreshire, or the Texas Longhorn.

Want to learn more? You can find all of my recent articles here!