Cows have been domesticated for over 10,000 years, meaning humans have been tending to, thinking about, and talking about cows for a long time. Considering this, it’s no wonder that quotes and sayings about cattle are a dime a dozen – this quirky popular livestock inspires the philosopher in us all.

Here you will find my favorite cow quotes broken up by idioms, amusing sayings, quotes about the humane treatment of cattle, philosophical quotes, proverbs, and scripture about cattle. I’m sure you’ll find a couple of favorites in each category! An idiom is a saying that has become popular not by logic but through years of cultural usage. There are many idioms about cattle; below are some of the most popular ones.

“Don’t have a cow” – used to tell someone to calm down or chill out – most often toward someone who overreacts to a situation. The origins of the saying are unclear, but there is said to be an old British saying along the same lines, but using “kittens” instead of “cows.”

“Till the cows come home” – is used to describe an indefinite time frame or a long wait. It is thought to have originated in the Scottish Highlands when cattle would graze for months during the Summer before they would slowly make their way home come Fall.

“Don’t cry over spilled milk” – while the origins are up for debate, this idiom has been used for centuries. It means there is no use worrying over something that has already occurred because the past cannot be changed.

“Holy cow!” – is an expression of surprise or excitement, meaning “wow!”. The idiom seems to have picked up steam among major league baseball announcers in the early 1900s.

“Take the bull by the horns” – this idiom means to tackle an unpleasant or challenging task head-on. It likely originated from the early American West.

“Like a bull in a china shop” – is a quote from an 1834 novel by Frederick Marryat and has since come to describe a clumsy person or someone who breaks things or otherwise causes chaos.

“As awkward as a cow on a crutch” – though the origins are unclear, this idiom is used to describe someone clumsy, uncoordinated, or off-balance.

“Strong as a bull” – was used in a 1950’s sitcom and has become a popular way of describing someone of great physical strength.

“If you mess with the bull, you get the horns” – the origins are unclear, but this idiom may have been born when the actor Paul Gleason spoke the words in the movie, The Breakfast Club. The saying explains that if you provoke someone to anger, you should not be surprised by an aggressive reaction. The following cow quotes are amusing and clever, offering wisdom with a side of humor (which is the best way to provide insight, isn’t it?).

“Never kick a cow chip on a hot day.” – Will Rogers

“I don’t want any vegetables…. I paid for the cow to eat them for me.” – Douglas Coupland

“A cow’s heaven is a flower’s idea of hell.” – Oliver Gaspirtz

“It’s a moo point. It’s like a cow’s opinion; it doesn’t matter. It’s moo.” – Joey, from the TV sitcom Friends

“I never saw a purple cow; I never hope to see one; But I can tell you, anyhow, I’d rather see than be one.” – Gelett Burgess

“The path of my life is strewn with cowpats from the devil’s own satanic herd.” – Rowan Atkinson

“Who discovered we could get milk from cows, and what did he think he was doing at the time?” – Billy Connolly

“Moo may represent an idea, but only the cow knows.” – Mason Cooley

Whatever your dietary beliefs, it should go without saying that to be good stewards of the animals entrusted in our care, we should provide humane treatment. Below are quotes about morality, animal rights, and veganism concerning cows.

“The facts are like cows. If you look them in the face hard enough they generally run away.” – Dorothy L. Sayers

“The cow is nothing but a machine which makes grass fit for us people to eat.” – John McNulty

“I can tell a good cowboy by the way he approaches a cow.” – Henry Green

“Mother cow is as useful dead as she is alive.” – Mahatma Gandhi

“As for butter versus margarine, I trust cows more than chemists.” – Joan Dye Gussow

“The only thing that dairy is supposed to do is turn a 50-pound calf into a 300-pound cow in six months. If those are your aspirations, knock yourself out.” – Neal D. Barnard, MD

“To give your sheep or cow a large, spacious meadow is the way to control him.” – Shunryu Suzuki

Did you know that cows can be extremely affectionate animals? To learn more about how cows show affection, visit my article Cow Affection: 10 Clear Ways Cows Show Affection. Cowboys and ranchers spend hours, days, and months on the plains, watching their cattle. This allows plenty of time to sit and think about life, the world, and our place in it. Below are some of the best cow quotes that will make you think, some of which anyone can apply to one’s life.

“It doesn’t matter how much milk you spill as long as you don’t lose the cow.” – Harvey Mackay

“You can only milk a cow so long, then you’re left holding the pail.” – Hank Aaron

“Just because a cow stands in a field all day doesn’t make it a philosopher.” – Vaseem Khan

“Not every man remembers the name of the cow which supplied him with each drop of milk he has drunk.” – Shmuel Yosef Agnon

“The cow knows not what her tail is worth till she has lost it.” – George Herbert

“As a calf follows its mother among a thousand cows, so the (good or bad) deeds of a man follow him.” – Chanakya

“If you want milk, don’t sit on a stool in the middle of a field in the hope that a cow will back up to you.” – Richard Branson

“I don’t believe that you have to be a cow to know what milk is.” – Ann Landers

“Don’t milk the cow too hard. She will kick you.” – Mason Cooley

“No longer diverted by other emotions, I work the way a cow grazes.” – Kathe Kollwitz

“All the really good ideas I ever had came to me while I was milking a cow.” – Grant Wood

“If you are not interested in your own country’s problems, then what difference remains between you and a cow eating grass in a quiet corner unaware of anything around itself.” – Mehmet Murat Ildan

“We are like a cow and a goat, wanting to be friends but wondering if it can ever be.” – Katherine Applegate 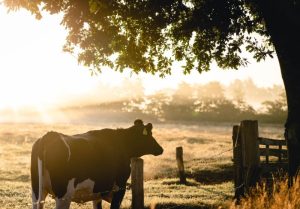 These ancient cow proverbs provide timeless wisdom that is anything but outdated.

“A fool looks for dung where the cow never grazed.” – Ethiopian proverb

“When mother cow is cropping grass, her young one watches her mouth.” – Nigerian proverb

“A cow that has no tail should not try to chase away flies.” – Guinean proverb

“You don’t miss the cow until the stall is empty.” – Swedish proverb

Did you know that there are many different types of cows? Some cow breeds are hairy and fluffy by nature! To learn more, visit my article Top 10 Fluffy Cow Breeds (With Pictures.)

There is no wisdom like that found in the Bible, and several passages about cattle and other livestock are located within the book. Below are a few cattle-specific or milk-specific verses.

“He causes the grass to grow for the cattle, and vegetation for the labor of man, so that He may bring forth food from the earth.” Psalm 104:14

“Better is a dish of vegetables where love is than a fattened ox served with hatred.” Proverbs 15:17

“For everyone who partakes only of milk is not accustomed to the word of righteousness, for he is an infant.” Hebrews 5:13

“Like newborn babies, long for the pure milk of the word, so that by it you may grow in respect to salvation.” 1 Peter 2:2

Cow Quotes For Every Situation

Which is your favorite cow quote? Whether a rancher or a philosopher, you can find a cow quote, idiom, or proverb to apply to almost any aspect of life. I hope you enjoyed 50 of my favorites, many of which made you stop and think, as they did for me.

Trying to come up with a name for your animal? Check out these articles!

link to Can Pigs Look Up? (Why Pigs Can’t Look Up To The Sky)

Can Pigs Look Up? Have you ever seen a pig staring up at the sky, daydreaming, and watching the clouds soar by? You probably haven’t - and not just because pigs have better things to do than stare...

Continue Reading
link to Can Baby Ducks Swim? And Other Rearing Tips