What Do You Call A Group Of Sheep

When it comes to groups of animals, there are so many unique phrases that it can be difficult to know what to call them. As far as sheep are concerned, you’ve probably heard both herd and flock used to describe them. But which one is correct?

What do you call a group of sheep? While either “flock” or “herd” is applicable to sheep, usually the term “herd” is used for terrestrial animals gathered together in a group, while “flock” refers to a group of birds, especially a group gathered for migration purposes. Either term is acceptable to use when referring to a group of sheep.

Now that you know what to call a group of sheep, you might be curious to know what other groups of animals are called. Keep reading to learn more!

The term “herd” usually refers to a group of terrestrial animals not only gathered in a group but who gather in a group for protection. While a flock of birds gathers for warmth or slipstream benefits while flying long distances, a herd congregates for safety. Herds are made up of prey animals such as llamas, alpacas, sheep, goats, donkeys, buffalo, deer, elephants, horses, and cows.

These animals are all herbivores, meaning that they only eat grass and other vegetation. They don’t eat meat and don’t intentionally eat insects, though some insects might accidentally be ingested when eating vegetation.

Animals gathered in herds are usually either grazers or browsers. Grazers prefer low-lying vegetation such as grass and hay. They also tend to be larger animals because grass and hay are fibrous and harder to digest, so they need a bigger digestive system to process all that fiber.

Because they only need to reach the ground to find food, they tend to have shorter necks. They also have wider muzzles because they don’t need to be careful about what they pick up to eat. There’s just a lot of grass down there and their lips grab big sections of it.

Browsers, on the other hand, prefer things that are a little harder to get to. Leaves, shrubs, and other taller plants are their favorites. Those things tend to be less fibrous and therefore more easily digestible. So they don’t need big digestive tracts to process it all and tend to be smaller in size. But they also usually have long necks so they can reach that higher-up vegetation.

And because the good parts like leaves tend to be attached to woody parts like branches, browsers tend to have more petite muzzles so that they can more easily strip just the bits they want from the woody stems. They need to be selective in this way because wood is basically indigestible by all animals (except termites), and therefore, any effort in pulling it down and chewing it up is wasted on woody items. Their smaller muzzles help them select just the good parts. 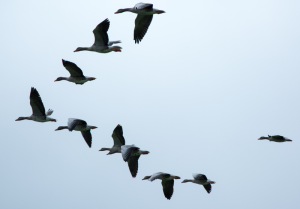 While the term “flock” refers to any group of birds, there are more specific terms used for certain types of birds. Interestingly, most of these terms are words that either describe a vocalization the type of bird makes or some other action they are commonly known for or associated with.

A Brood of Chickens

In this case, a “flock of chickens” refers to a group of both chickens and roosters, or both males and females, while a “brood of chickens” is truly a group of only hens, or females. “Brooding” is the act of getting ready to lay eggs and may include nesting and frequently repositioning the way the bird is sitting to prepare to lay eggs comfortably.

A Siege of Cranes

While “flock” works just as well, the term “siege” is a bit more interesting. How could a group of marsh birds with long, skinny necks and legs be referred to by such a military term?

This is because groups of cranes have been known to literally march together after predators to intimidate them away from their nests and chicks. Together, they march like a group of soldiers about to lay siege to a city as they protect their offspring and territories.

A Murder of Crows and an Unkindness of Ravens

Despite being frequently confused for each other, ravens and crows are different species of birds. They are, however, in the same genus.

The precise reason for their groups being called a “murder” or “unkindness” is unknown, but there are several theories. One is that because crows and ravens are scavengers, they are associated with death, battlefields, and decay.

Another theory is that crows will gather together and murder one of their own if it has committed some offense against the flock, but this seems to be an old folktale and not grounded in scientific evidence or observation.

These two groups of birds have had an association with death for so long that their strange flock names have come up in poetry and other literature for hundreds of years.

A Paddling of Ducks

This name makes complete sense. Ducks do a lot of paddling, and a lot of the terms to describe a group of animals come from a verb of something the animals in question are known for doing.

A Dule of Doves

The term “dule” comes from a French word that means “lament.” This is because of the sad, lamenting sound that most doves make. The most common dove in most of the US is the mourning dove, often mistakenly called the morning dove, as in the early part of the day rather than the state of being in mourning as for a deceased loved one.

Because of this sad vocalization, groups of doves are also called tears, lamentations, and piteousnesses.

A Gaggle or Skein of Geese

This is perhaps one of the most commonly known names for a group of birds. Obviously, this term comes from the vocalization geese make to communicate with others and let humans and predators know when they’ve come too close.

A “gaggle” only refers to a group of geese on the ground, however. When they are flying through the sky, they are referred to as a “skein” of geese. This may be due to how the lines they form in flight resemble yarn being pulled from a skein of yarn.

Other groups of birds named for their vocalizations include a tittering of magpies, a squabble of gulls, a scolding of jays, an exaltation of larks, a pandemonium of parrots, a clamor of rooks, a slurp of sapsuckers, a chime of wrens, a gulp of swallows, and goggle of turkeys.

A Cast of Hawks

There are two possibilities for where this term came from. Hawks “cast” up the indigestible parts of a meal much like how owls cough up owl pellets. This is an undesirable possible definition.

The other possibility is that the term “cast” also refers to the act of restraining a hawk such as if for a veterinary examination.

A Parliament of Owls

A group of owls is called a “parliament” because owls are often considered to be wise and thoughtful scholarly type birds. In mythologies and folklore, owls can be found playing the part of the mentor in a story or being another source of valuable information. Since the parliament is a legislative body of government, it is presumed to be made up of similarly intelligent and wise individuals.

A Pride of Peacocks

Other terms used to describe a group of peacocks include an ostentation and a party. Peacocks are known for their flamboyance and apparently high opinion of themselves, so this comes as no surprise. Thanks to their unusual and beautiful tails and their way of strutting around as if to show off, these names fit perfectly.

A Charm of Finches

Perhaps the only unfitting name in this list, a group of finches is called a “charm.” Finches tend not to be very charming little creatures, however. Because of their minute size, they must work hard to compete with bigger birds for the chance to feed, and they’ve all got pretty snappy little tempers as a result.

So why are they called a “charm?”

They got this name from an old English term that referred to their pretty twittering song. So even though they are not charming creatures to interact with, when left alone they do make a charming song. Cats usually have a litter of four to six kittens. But some momma cats, or “queens” as female cats are called, have had as many as ten or more kittens in one litter.

Dogs usually have a litter of five or six puppies, with some dogs having more than twelve in a single litter.

Mice and rats usually have six to nine “pups” per litter. But they can have as many as eighteen at one time! And rodents can produce a litter up to once every month!

You can learn more about sheep and other animals in my most recent articles here.