How to Tell If a Goat is in Heat

If you have goats and are interested in breeding them, you will need to know what signs of heat to watch for in your females so that you don’t miss the opportunity to bring in a buck and allow them to mate.

What are the signs of heat that you should be watching for in your females? Female goats (does) will usually show several signs of heat when they go into estrus. Here are some common signs a goat is in heat:

Read on to learn more about the breeding and estrus cycle in goats, and the signs of heat that you can watch out for.

Signs Of Heat In Goats

When female goats go into heat, they are ovulating and are able to get pregnant in this time frame. There are a fews reasons why someone may want to know when their goats are in heat. If you want to breed your goats, knowing when the females have gone into heat will let you know when you need to put the male goats in with the herd. Another reason to know when a goat has gone into heat is to be able to diagnose certain different behaviors that you may have not seen in your goat before.

Though not as common, some does do not show any signs of heat – this is called “silent heat”. For the majority, however, there are several signs that you can watch out for to help you determine when your goat is in heat.

Signs of  Goats in Heat #1: Flagging

One of the first signs of heat in your doe might be flagging. Does usually begin to wag their tails – called “flagging” – before they show other physical and behavioral signs of heat. If you see your doe wagging her tail more often than usual, this may be a sign that she is going into estrus and is spreading her scent to neighboring bucks by wagging her tail back and forth.

Signs of Goats in Heat #2: Discharge

Most does will begin emitting discharge when they go into heat. This discharge will be slightly thick and sticky, and is usually clear to opaque or milky. You should be able to notice this discharge and can check her tail area if you are unsure. If she is showing signs of discharge the sides of her tail or rear end may be sticky or wet, and the hair may be in slick clumps.

While some does do not show signs of swelling, many does will have a swollen and red vulva. If your doe is swollen, this will be obvious to the eye and will usually accompany the discharge. If you see both discharge and a swollen vulva, it is time to bring that buck in!

Signs of  Goats in Heat #4: Interest In Bucks 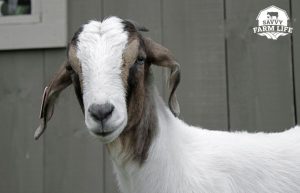 When a doe is not in heat, she will not be romantically interested in bucks. When she goes into heat, however, that is a different story. Does in estrus will often seek out bucks – pacing the fence separating them from her, calling out to them, and even pushing herself against a buck and “standing” for him if he is available to her.

If you do not want to bring your doe to the buck pen to see if she shows interest, there is a test you can do called the “buck rag” test. Rub a rag against a buck’s forehead and immediately put the rag into a closed jar. Bring the jar to your doe and open it, allowing her to take a whiff. If she is in heat, she will smell the buck and will be obviously excited – calling out or pacing. If she gets visibly excited at this smell test, it is time to introduce her to the real thing.

This one is not necessarily a sign that your doe will show you – instead, you will need to look to the bucks for this one. A buck will be able to tell if your doe is in heat, and much easier than you. Bucks will smell a doe in heat, and if your buck is visibly and obviously excited around your doe, this usually means that she is in heat and is emitting the pheromones and hormones that are telling him she is ready to mate.

Signs of Goats in Heat #6: Urination

Let’s talk about urination, because you will see signs of heat using signs of both your doe’s and your buck’s urination. To a human, some of these signs might seem distasteful, but are natural and healthy for goats.

When a doe is in heat, she will often urinate more frequently, and she will usually urinate right in front of a buck. There is a lot that a buck can tell from urination, and the smell of the doe’s urine will let him know she is receptive. When a doe in estrus urinates in front of a buck, he will often stick his face into the urine and will pull his lips back to get a good whiff. He may even lick the urine to really immerse himself in it to see if she is in heat. If she is, he will become excited and may vocalize and show signs of dominance.

This is where things might sound a little weird (as if a buck sticking his face into a puddle of doe urine is not strange). When a doe is in heat a buck will often urinate on his own face and beard so that a doe can smell his hormones and pheromones on his face. This smell is pleasing to females and will attract does in heat.

Other Signs Of Goats in Heat

While the above are the most common signs of a doe in heat, there are a few other signs you may notice as well.

Your doe may become much more vocal when she is in heat, especially if she is around bucks. Goats bleat, and a doe can begin bleating very loudly and repetitively when she is in heat – this can sound like yelling or even screaming.

Goats communicate in using many different vocalizations. To learn more about this, visit my article Why Do Goats Scream? Goat Behavior Guide.

A doe may begin behaving differently when she in heat, even amongst other does. Does in estrus may begin displaying dominant behaviors with her sisters, and may even mount other females. This is usually not a cause for concern and is just an outlet.

A doe in estrus may also eat less than she normally does. So long as you suspect she is in heat and there are no other signs of illness, this is not a cause for concern – just make sure she starts eating a normal amount again after a couple of days.

When your goat can be bred will depend on your goat’s breed. Some goat breeds go into heat year-round, and can therefore be bred throughout the year. Other goats are seasonal breeders, going into heat in late Summer until early Winter – usually from August through January. It has been shown that bucks (male goats) have the highest libido and sperm quality in the late Summer and Fall.

Depending on your goat’s breeding cycle, you can safely breed your doe 1 – 2 times in a given year. The average gestation period for a goat is 150 days, or around 5 months, with does giving birth to an average of 2 – 3 kids (babies) per pregnancy.

Does reach sexual maturity between 4 and 12 months, depending on the breed and the individual goat. However, you should wait until your doe has reached 60% – 70% of her breed’s average adult weight before attempting to breed her. If your doe is bred too early, she can develop problems with the birth of her kids, as well as future reproduction.

While we know that some goats go into heat year-round, and some seasonally, what does the estrus (heat) cycle look like in does?

The typical estrus cycle in a doe lasts between 17 and 25 days, with 21 days being the average. During this cycle, a doe will be in heat from anywhere between 12 hours and 3 days. Estrus in does starts gradually before it peaks, and then tapers off. This peak is called “standing heat” and is when the doe is receptive to mating.

Heat Will Look Differently For Every Doe

While the above signs are all normal signs of estrus in does, you may see only some of them or even none at all. You may also see other changes in your doe not listed here – such as behavioral changes. It is important that you spend time observing your goats, and after several cycles you should be able to notice your particular doe’s telling signs of heat.

Since goats can’t physically talk like humans, they will largely use their body language to communicate. To learn ways goats may communicate, visit my article Goat Affection: 10 Clear Ways Goats Show Affection.