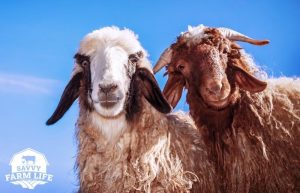 I Bet You Didn’t Know This About Sheep!

Sheep are one of the most popular farm animals in the USA. They are commonly known and easily recognizable. Every kid learns that sheep say “baa” when they learn that dogs say “ruff” and cats say “meow.” But there is a lot more to sheep that you may not know about! Here are forty-five fascinating facts about sheep.

Facts About Sheep in History

Ancient Egyptians believed that sheep were sacred and mummified them like they mummified humans. But they didn’t mummify all sheep. This was a practice usually done for extremely wealthy individuals. They would mummify their animals and servants so that they would be able to continually use them in the afterlife.

The first animal ever to be successfully cloned was a sheep named Dolly in 1996.

How Long Have Humans Had Sheep?

Sheep were domesticated in Central Asia around 10,000 years ago.

What Can I Make Out of This?

Humans learned how to spin wool into yarn and use it for making things in 3,500 BC.

How Many Sheep Breeds Are There?

There are over 1000 distinct breeds of sheep around the world. At least 40 breeds are dispersed around the US.

How Many Horns Can Sheep Grow?

Hebridean Sheep are polycerates, which means that they are able to grow extra horns. Usually an even number like four or six rather than the usual two horns on most rams.

Can Female Sheep Have Horns?

The Racka sheep breed is one of the breeds in which both males and females have horns. They are long and spiraled instead of curled tightly back like regular rams.

Najdi sheep have long, silky wool instead of curly wool like other breeds. These sheep originate from Saudi Arabia, and ewes sell for as much as $8,000 USD. They regularly participate in local sheep beauty pageants.

Sheep Love the Beach Too!

Sheep have the ability to remember more than you’d think. Scientific studies have shown that they are capable of recognizing the faces of at least 25-50 other sheep for at least two years when prompted with a food reward.

Sheep Feel a Range of Emotions

Sheep have been scientifically proven to experience emotions such as fear, sadness, and happiness. Sheep are also frequently stressed due to the threat of predators or annoying humans. It is important to help sheep feel safe and comfortable in their home so that they will live longer and produce better throughout their lives.

To learn more about how intelligent sheep are, visit my article How Smart Are Sheep (The Answer Will Surprise You.)

Did You Know That Sheep Eyes Smell?!

Sheep have scent glands in front of their eyes and in between the digits of their feet that bear a unique smell. This is one way that they tell each other apart. But humans don’t have sensitive enough smelling abilities to tell sheep apart this way.

Sheep have rectangular pupils, just like goats. This gives them a better range of vision. With both eyes, they can see almost all the way around themselves which is an excellent advantage over predators. While most prey animals don’t have rectangular pupils, they do have eyes arranged to look at opposite sides of their field of vision, while most predatory animals have both eyes right in front. This is because prey animals are always on the lookout for predators to come at them from any direction, and predators only need to face forward when they’re chasing down their prey.

To learn more about how well sheep can see, visit my article What Sheep Can See: Color Spectrum, Range of Vision & More.

Sheep have a small divide in their upper lip called a philtrum that helps them more easily grasp the foods they want when they’re browsing. Without it, they would have a more difficult time being as selective as they like to be.

Sheep don’t have upper incisors. Instead of teeth in the front of their upper mouth, they have a hard bony palate. The palate grinds against the lower teeth to break down food. They have eight incisors on the bottom and twenty-four molars between the upper and lower jaws.

The body temperature of sheep is quite a bit warmer than that of humans. Sheep regularly measure 102.5 degrees F. While this is fever temperature for humans, it is normal and comfortable to a sheep. If you ever touch a sick sheep and it feels cold to you, that is a very bad sign. Warm a cold sheep as quickly as you safely can and seek veterinary advice immediately.

Are Sheep Born With Short Tails?

Sheep are born with long tails. Sometimes their tails are docked early on to prevent cleanliness issues later in life.

Do Sheep Have Cloven Hooves?

Sheep have two digits with separate little hooves on each foot, like a cow. Horses only have one large hoof per limb. The skulls of domesticated sheep differ from those of wild sheep. In domesticated sheep, the eye sockets and brain case are smaller than in wild sheep. This is likely because sheep with milder temperaments were selected for breeding rather than those that thought for themselves more and were more difficult to manage. Over the years, the selective breeding of calmer sheep resulted in these areas being smaller. In the wild, only sheep with stronger vision and smarter brains could live to reproduce, hence these spaces becoming larger over the generations.

How Do Wild Sheep Get Rid of Their Wool?

Wild sheep shed their wool like dogs. They don’t require a human to shear it off for them. Domestic sheep have been selectively bred over thousands of years to produce the kind of wool that they do now. If a domestic sheep gets loose in the wild, its wool will keep growing and will become unbelievably dirty and heavy. Sheep can get stuck by their wool if it gets tangled around a tree branch or other obstacle.

How Often Should Sheep Get Sheared?

Sheep have their wool shorn once a year and look totally different without it.

What Can You Make Out of Sheep Wool?

Did You Know We Eat Baby Sheep?

Lamb has the lowest cholesterol contents of all red meat. It is a highly desirable source of protein and a healthier choice than some other red meats.

Can You Milk a Sheep?

Feta cheese is made from sheep’s milk or a combination of sheep, cow, and goat milk.

How Much Wool Do Sheep Produce?

One year’s growth of wool weighs about eight pounds once it is shorn from the sheep.

Does Yarn Come From Sheep?

One pound of wool makes ten miles of yarn. One advantage of wool over cotton is that it doesn’t wrinkle.

The fat from sheep meat is called “tallow” and can be used to make soap and candles. This was a more common practice in historical times.

Sheep who live in a big flock tend to form closer bonds with other sheep who are closely related to them genetically than with sheep who aren’t in their immediate family.

How Fast Does a Baby Sheep Stand Up?

Newborn lambs (baby sheep) are able to stand and walk with the rest of the herd almost immediately. They are much faster at getting around than baby horses or cows. Baby animals that are born this way are called “precocious.”

Sheep Can Recognize Each Other By Their Vocalizations

Mother sheep find their lambs by their unique bleating sounds. Every lamb sounds different. Mothers also recognize them by their unique smells. With these traits, it is possible for lambs and mothers to find each other even in the midst of a herd full of other sheep that look exactly the same.

Is There an Alpha Sheep?

Sheep have hierarchies in their herds to establish who’s in charge and who gets to eat first and gets the most desirable places to sleep.

Sheep Were Not Meant to Live Alone

Sheep are herd animals. They need to have their friends around at all times or they will become uncomfortable and depressed. Sheep can display anything from excessive lethargy to physically destructive behavior if separated from the flock for an extended period of time.

How Much Does a Sheep Eat Per Day?

A single sheep eats about 2-4 pounds of food every day.

What Do Sheep Eat?

Sheep are herbivores, which means that they only eat vegetation. No meat for them.

How Long is a Sheep Gestation Period?

Sheep are pregnant for about 150 days before giving birth to their lambs. Need to know if your sheep is pregnant? Visit my article How To Tell If A Sheep Is Pregnant: Sheep Pregnancy Guide.

How Many Lambs Can a Sheep Have?

A ewe gives birth once a year and usually has 1-3 lambs per pregnancy.

How Much Do Sheep Weigh?

Lambs weigh between five and eight pounds when they are born. Adults reach 90-400 pounds depending on whether they are males or females and what breed they are.

When Should You Wean a Lamb From Its Mother?

Sheep are old enough to leave their mothers around 3 months of age and usually live between six and eleven years.

In Scotland, stealing a sheep is still a serious crime.

Aries is the first sign of the zodiac and is named after part of the sheep’s classification. Aries is often drawn as a ram.

In many areas of the world, National Hug a Sheep Day is the last Saturday in October.

China has the largest number of sheep of all countries in the world.

How Many Sheep Are in the World Today?

There are over 1 billion sheep on earth today. But more beef and pork are consumed altogether than sheep or lamb meat.

Sheep are generally unable to get themselves back up if they get stuck on their back. This does make it easier to handle them during shearing by placing them in a sitting position on their rump. But if you come across a sheep struggling on its back, it’s best to lend a hand.

Want to learn more cool facts about sheep? Visit my article Can Sheep Survive In The Wild? Wool Growth and Behavior Facts.