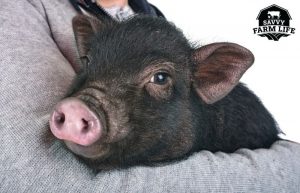 How Do Pigs Show Affection?

Though not as common as a cat or a dog, pigs make wonderful pets, both on the farm and in the home! If you’ve never owned a pig before, it’s a good idea to research ways they may try to communicate with you. Since pigs can’t talk, they’ll have to use body language and vocalizations to communicate their needs and emotions.

Pigs are highly intelligent animals and are able to experience and express a variety of emotions. If you’re a new pet owner, it can be difficult to decipher some of this behavior. Read on for a deeper dive into how pigs show affection and other emotions!

Pigs have a variety of different “grunts” that they use to communicate with one another (and with you). There are loud and continuous grunts, which is an indication your pig is trying to communicate a warning or a threat, or may be experiencing displeasure or irritation with another pig or a human. There are low, sad grunts which can indicate loneliness or depression – sometimes accompanied by crying with actual tears. And there are also “calm” grunts, which can be an indication that they are content and calm. This can mean that they trust you and are trying to get your attention. If you hear your pig calmly and softly grunting around you, acknowledge him with a pet.

While pigs use grunting to communicate, you will likely need to spend plenty of time with your pigs before you are able to clearly decipher the meanings behind your pig’s grunting. Like humans, pigs have individual personalities and some are quieter or louder than others. This is why it is important to spend as much time as you can with your pigs so that you can learn their personalities and behaviors, and decode their grunts.

Nudging is just as it sounds – when a pig nudges you, it means they push against you with their snout. You may find a pig nudging a new herd member or even an inanimate object; this is often a sign that they are curious and wanting to learn more about the item, animal, or person that they are nudging.

Pigs enjoy being scratched and pet, so if you find your pig gently nudging you, give them a scratch or a pat on the head to acknowledge their request for attention. If your pig is new to your home, the nudging may mean that they are beginning to trust you and would like to learn more about you. If your pig is an established member of your herd, her gentle nudging is more likely a sign of affection and a desire for your attention.

Pigs do not generally like being picked up, so when your pet pig comes by to take a seat on your lap, you can consider that a sign of affection and deep trust. You can reward your pig by giving her affection back and petting her while she is on your lap. Remain calm and avoid sudden movements if you can, so that she learns that your lap is a safe place to rest. Of course, with this segment we are specifically talking about young pigs and the smaller “mini” pigs. You should not encourage lap visits from your 300 pound pig!

If you’re new to pigs, having a pig all up in your space may not be your cup of tea. Don’t pigs smell bad? The last thing you’d want is their odor getting all over you. Believe it or not, but pigs are actually one of the cleanest animals on earth! To learn more, visit my article Do Pigs Smell Bad? Pig Odor Guide.

Like humans, pigs enjoy cuddling as a way to communicate affection and contentment. You may see your pigs cuddling with one another, or even with other pets. It is not uncommon for a pig, especially a pig kept purely as a pet, to develop a close relationship with other household pets. Pigs may cuddle up to take a nap, or cuddle to get attention. They will also cuddle with their humans if they have a trusting and comfortable relationship. A pig may also show you affection by snout kissing. This is similar to nudging, but your pig may linger longer with his snout against you, or may press in further with his snout. You may also see pigs pressing their snouts against one another as well. This is an endearing display and if you are lucky enough to be on the receiving end of a snout kiss, feel free to kiss them right back if you would like!

A pig will not lick you as commonly as a dog might, but when they do, it can be an endearing treat. If your pig does reward you with a lick, you can consider it a sign of affection and love. Give them a pet or a scratch to show you appreciate the affection.

Like many animals, pigs will wag or swish their tails back and forth as a way to communicate. Tail wagging in pigs is similar to that in dogs – it often is a sign of happiness and contentment. If your pig wags her tail while you are petting her, it means she is happy and is enjoying the attention you are giving her.

When a pig is tailing you, it means he is following you around. He is your shadow! This means that he wants to be around you and wants your attention. You can meet this need by giving him a pat or talking to him as you go about your daily chores.

At one point in time, we had a random pig that one day appeared at the horse barn. I wasn’t sure where he came from but one day he was just there grazing with the horses. Over time, some days he would be in the horse pasture and other days he wasn’t anywhere to be found. However, anytime I would yell and call for him, he would come running, whether it was from the woods across the way or from the horse pasture. It was a funny sight, but I also knew that he was excited to see us.

Of course, tailing can also be a sign that your pig wants something from you. Is she tailing you specifically around dinner time? If so, this may not be a sign of affection so much as a sign of impatience or anticipation of feeding time. She may also take to tailing you in expectation if you regularly offer her treats when you are with her.

Pigs love to play! They may play by running around, back and forth or in circles, in excitement. If your pig starts doing this as soon as you walk outside it can be a sign that they are excited to see you! This may especially be true for young pigs – after all, younger pigs are full of energy compared to their older counterparts and they will need some way to release that energy and excitement.

Your pig may also start playing when they see you if they are feeling particularly playful and wants your attention. They may also zoom as a way to “show off.”  Regardless of which of these reasons for playing, you can safely assume they are excited to see you and want your attention and affection (and treats).

Yes, pigs really do smile. And if you have never seen a pig smile, it is worth it to look up a few pictures online. Pigs are very expressive animals, and the smiles that they give you will easily bring a smile to your face as well. Pigs smile when they are feeling happy and content – just like humans. If your pig smiles when he sees you, this is a sign that he is happy to be in your company and he trusts you.

How Intelligent Are Pigs?

You have most likely heard that pigs are intelligent creatures. But just how smart are they? Pigs are known as the most intelligent of domesticated animals, and the fifth most intelligent of all animals in the world. They have been shown to problem solve just as competently as chimpanzees, and have a level of intelligence equal to that of a 2 or 3 year old human child. Pigs are incredibly smart, which is one of the reasons that they can make great (while sometimes stubborn) pets.

How To Be On The Receiving End Of Pig Affection

Perhaps you just brought a new pig home and you have not yet seen any of these behaviors. Don’t fret – pigs are prey animals and it can take them some time to develop a trusting and comfortable relationship with you. Be calm and kind to your pig – being highly intelligent beings, pigs are also sensitive animals. If you speak harshly to them or give them a smack, they will remember and will be afraid of you in the future. It will take longer to RE-build trust than it will take to build trust from the beginning. You can also entice them to you with treats – in moderation of course. Once they are comfortable approaching you, start slowly with scratches behind the ear or on the top of the head.

If you are patient, calm, and kind with your new pig you should be seeing signs of affection in no time – and those kisses, cuddles, and sweet grunting will be worth every second!

Because pigs can be so friendly, they make great livestock for co-existing pastures or pens. To learn more about what other livestock or poultry pigs can co-exist with, visit my article Can Pigs And Chickens Live Together?