Most breeds of chicken have clean faces and sleek feathers, but if you’ve ever seen a chicken with crazy hair, you are likely to remember it. Some chickens have mohawks, crests, tufts, or even long tail feathers reaching up to 30 feet in length! If you are interested in adding the impact of a bird with crazy hair into your flock, you’ll want to know which breeds to look for.

Which chicken breeds have crazy hair? There are a number of breeds that boast crazy hair, and ten of them are:

Some of these birds are extremely rare and only available through a small number of dedicated breeders around the world. On the other hand, some of them are readily available from almost any online or local hatchery. Read on to learn more about these fascinating birds. If you’ve seen a chicken with crazy hair at a local farm, there is a good chance that it was a Silkie. Silkies are very popular and available almost anywhere. These birds have a poof of a crest on the top of their heads and are covered with soft, fluffy feathers that resemble the down of chicks in both appearance and texture.

These unique feathers are a result of the Silkie lacking barbicels, which are the tiny hooks that hold the feathers together along the barb. Because of the lack of barbicels, the Silkie cannot fly. For this reason, they often prefer to sleep in a pile on the ground instead of on a high perch like most chickens.

Silkies come in a bantam (miniature) and a standard size, though bantams are usually easier to find. They are adequate layers, providing as many as 2-3 eggs per week. While their small size does not make them a good dual-purpose or meat bird, many countries consider Silkie meat a delicacy because of the black skin and bones and the additional carnitine (purported to contain age-defying properties) they contain. 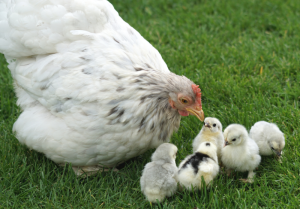 The Cochin is another bird commonly found in many hatcheries and is of an extra-large size, with roosters reaching up to 11 pounds at maturity. What makes the Cochin’s appearance notable is its profuse feathering all over its body, legs, and feet. This bird appears to have just come from the spa, blow-dried and fluffed year round.

Even better than the Cochin’s appearance is its personality – they are said to be unusually tame and accept confinement well, rarely testing boundaries and commonly seeing themselves as pets. Cochins lay similarly to Silkies, around 2-3 eggs per week, but unlike Silkies they are an excellent dual-purpose bird due to their size.

Less common than the previous two, the Araucana is a bird with an interesting appearance, with its sloping posture and its complete lack of tail feathers. Most interesting on this bird, however, is its “tufts.”

These tufts of the Araucana look like sprays of feathers shooting out from under the ears. The feathers that make up the tufts can point in multiple directions, giving them a true “crazy hair” appearance.

The Araucana is a decent layer, providing as many as three eggs per week during her peak. They are widely believed to have played a role in the creation of the Ameraucana breed and, thus, the Easter Egger. If you see a chick labeled as an “Araucana” at a local feed store, chances are you are actually looking at Easter Eggers. These three breeds are commonly mistaken for one another. Polish chickens, or White Crested chickens to some, are distinct for the significant crests at the tops of their heads. These crests are unlike those of other birds, and appear as actual caps or pom poms.

The abundant feathering is known to obscure the vision of the Polish chicken, making it susceptible to predators and easily startled. Polish chicks are available through several online hatcheries, and like the Araucana, are decent layers with the ability to provide around three eggs per week. Another crested bird, the Appenzeller Spitzhauben is quite rare in the United States but is available through a handful of online hatcheries. The crest of this bird features forward-facing feathers that resemble a mohawk.

The Appenzeller Spitzhauben is the national chicken of Switzerland, and is not well-suited to confinement. These chickens have a mind of their own, are not overly friendly, and will test boundaries and fences if given the opportunity.

If you are considering raising an Appenzeller Spitzhauben, you should have ample room for the bird to free-range during the day.

They may come into the coop at night, or you may just as likely find them roosting in a tree of their choosing. The birds are, however, quite attractive with their tall crests and speckled coloring and will give you around three eggs per week at their peak.

Houdans have similar crests to the Polish chickens, with abundant feathering covering the head and falling into the eyes. Along with the spray of feathers at the tops of their heads, they also have downy muffs (puffs under their ears) and beards. These birds are most commonly found in the “mottled” variety, with white feathers speckled over black feathers.

Houdans are excellent layers in hot, dry climates, with production rivaling a Leghorn. In sub-optimal conditions, the Houdan will still provide you with eggs, but only around 2 per week. While Houdans are not the most common breed on this list, they are often available through the larger online hatcheries but sell out quickly. When it comes to crazy hair, the Sultan has it all. These birds come complete with fluffy crests, full muffs, beards, feathered feet, and even a V-shaped comb to top it off. In addition to their numerous accessories, Sultan chickens have another unique feature that adds to their looks – they tend to carry their wings lower than other breeds of chicken, giving them a relaxed appearance.

Whether this breed is right for you depends on what you are looking for. They make lovely ornamental pets – with many chicken keepers noting the Sultan is the friendliest, most content bird in their flocks. However, if you are looking specifically for a layer, you might want to look at another breed. Sultans will give you around 1-3 eggs per week during the Spring and Summer. The Crevecoeur is a rare breed of chicken from France. They are more difficult to find, though there are a few online hatcheries that sell them in limited quantities.

Crevecoeurs have black feathering, beards, and crests on their heads. Their crests are not as fluffy as some of the other breeds on this list but rather made of feathers that stick out in several directions – leaving many looking like they have a case of bedhead.

Crevecoeurs are fun-looking birds and are known to have a quiet and friendly disposition. They are decent layers, providing around three eggs per week. The Kosovo Longcrower is so named for its extraordinary crow that seems to go on and on… and on. The Longcrower roosters are known for their 20-40 second long crow, with several especially winded roosters having a single crow that lasts as long as 60 seconds.

If you can imagine a rooster’s crow as a string of syllables, it is the last syllable that drags out for a considerable length of time. Kosovo Longcrowers are on this list not because of this unique ability, however, but rather for the mohawk-like crest that they adorn.

These chickens are attractive birds, black in color with sporadic white spots as they age. The Kosovo Longcrower is a decent layer in its earlier age, with production tapering considerably after the first couple of years. The Onagadori is a truly special breed and is almost exclusively limited to Japan (partly due to an export ban of Onagadori eggs to other countries). What is so unique about this bird? Onagadori roosters do not molt their tail feathers like all other chicken breeds. Instead, they continue to grow these 16-18 feathers throughout their lives, often growing as long as 25-30 feet in length.

Onagadori are poor layers, do not typically go broody, and require special living conditions to care for these long feathers (often wrapped in silk by keepers to keep them clean). So while they are stunning birds, they are not easy keepers.

Every Flock Has Room For A Crazy Hair Chicken

Whether you are raising for eggs, have a simple backyard flock, or are an avid seeker of rare birds, there is a crazy-haired chicken for everyone. While none of these birds can compete with a Leghorn or Rhode Island Red in terms of production, they sure are fun to look at. You can learn more about all kinds of farm animals in my latest articles here!

Continue Reading
link to Can You Eat A Rooster? Read Before Trying

Eating Roosters: What You Should Know You may never have thought about the gender of the bird that you purchased at the grocery store, but there is a benefit to knowing more about the chicken that...