What Are the Best Milk-Producing Sheep Breeds?

It is believed that the first animal to be milked by humans was most likely the sheep, and humans have been milking sheep for thousands of years. There are many advantages to raising sheep for milk, but how do you know which breeds are better suited to dairy?

So, what sheep breeds are best for dairy production? There are several different breeds of dairy sheep that are known for the quality and quantity of the milk they produce. These breeds include:

Being able to milk your own sheep can help you down the path towards self-sufficiency. Many people prefer sheep’s milk to cow and dairy, as it is creamier. People who have an intolerance to cow’s milk may be able to drink sheep milk without a problem. To learn more about milk-producing sheep breeds, keep reading!

Why Raise Sheep for Milk?

We have all heard of (and maybe tasted) goat’s milk, but what about sheep milk? Sheep milk is difficult to come by in the United States, but if you are willing to raise your own sheep, there are several advantages to their milk. Sheep have a higher amount of protein in their milk than both cows and goats – making it very efficient in cheese-making. If your goal is to make homemade cheese, you can get double the cheese from a gallon of sheep’s milk than with goat’s or cow’s milk. Sheep milk also tends to be easy to digest, making it a solid option for those sensitive to both cow’s milk and goat’s milk. Another benefit is that unlike goat’s or cow’s milk, sheep’s milk can be frozen and thawed without losing quality or flavor.

Below is a table highlighting 7 of the most popular dairy sheep breeds. All of these sheep breeds can breed out of season, with the ability to produce lambs every 8 months. This is important to know, as it means their milk production will be more frequent compared to sheep who only breed once a year. Continue reading for more information on each breed! 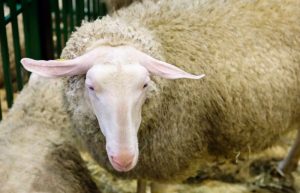 The East Friesian is sensitive to heat, and does best in northern, colder climates. For this reason, it is often cross-bred with heat-tolerant breeds to create increased milk production in breeds native to warmer climates.

In addition to climate restrictions, the East Friesian does not do well in large commercial herds – instead preferring smaller, more intimate flocks. East Friesian are known to thrive in flocks as small as 2-3 sheep.

The East Friesian ewe also tends to be a more aloof mother – often wandering off from her newborn lamb. For this reason, breeders will often pen the ewes and their lambs together so that the lambs are cared for.

These sheep also produce wool, a thick fleece of hair that must be sheared off once a year. Besides milk production, many people produce income from their sheep by selling wool. To learn about the best sheep breeds for wool, check out my article Best Sheep For Wool: Top 8 Sheep Breeds for Wool. 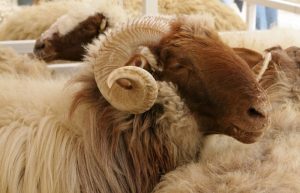 The Awassi sheep is a popular choice of milk-producing sheep, producing up to 400 liters of milk per 150-day lactation period, with a 5.4% protein average and up to 13% fat. Awassi are also used in the production of wool and meat.  Like most dairy sheep breeds, they have docile and easy-going temperaments. One of the benefits to Awassi is their natural resistance to many parasites and diseases.

Ewes are attentive and alert mothers, however Awassi rams have been known to be aggressive, so take special care around the rams if breeding.

Originating from the Middle East, the Awassi is well adapted to high heat and drought conditions, making it an excellent choice for dry, hot climates and poor pasture. Awassi are also adaptable to the nomadic lifestyle, able to travel long distances to find pasture. 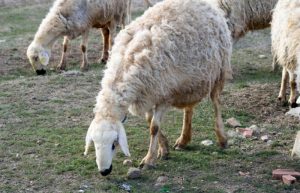 Lacaune sheep are very popular in France, which is where they originated. Lacaune produce around 280 liters of milk per cycle, over a 165-day lactation period. Their milk is around 7.21% fat and 6.19% protein. Though the quantity of milk is less than some other breeds, milk from the Lacaune sheep tends to have a higher fat content and excellent quality.

The Lacaune is a wool-producing sheep, however they will typically shed their wool from the chest down annually without assistance. This makes the breed lower-maintenance than some other breeds because only the back of the sheep needs to be sheared on a regular basis.

This breed is highly adaptable to different climates and can handle extreme fluctuations in weather, making this a good choice for almost any climate in the United States. Lacaune sheep are docile and friendly, making them easy keepers and barn companions. 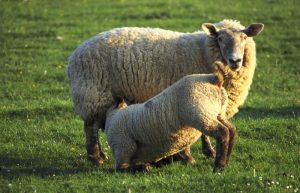 Another popular dairy sheep breed is the British Milk Sheep. The British Milk Sheep can produce 250 to up to 400 liters of high quality milk per lactation cycle, which is approximately 210 days. Milk from this breed has around 6% fat and 6.9% protein.

Ewes of this breed are exceptionally prolific breeders and good mothers, averaging 3 lambs per breeding. Sextuplets have often been reported, and one particular British Milk Sheep ewe produced a lifetime record of 44 lambs in 10 breedings.

British Milk Sheep tend to be a docile breed, which is a prominent characteristic in many dairy sheep breeds. They are tolerant of many climates, and well adapted to the rugged terrain they originated from. We learned above that the East Friesian is often cross-bred to produce quality milk producers that are tolerant of other climates. The Assaf sheep is a perfect example of this – developed by breeding the East Friesian with the Awassi, the Assaf can produce an average of 460 liters of milk per lactation cycle. Milk from the Assaf averages around 6.65% fat and 5.4% protein. Prolific breeders with the ability to breed out of season, ewes average 3 lambs in 2 years.

Assaf are well-acclimated to their native Middle Eastern and Mediterranean climates. Because of this, they do best in warm, dry environments. In addition to its use as a dairy sheep, Assaf are bred for their meat as well.

The Assaf sheep is a docile and active breed, easily managed and trained to milk by the small farmer. In addition to their gentle nature, they are highly resistant to diseases and parasites, making them a lower-maintenance sheep than some breeds prone to health problems. The Rideau Arcott is a multi-purpose breed, known for its exceptional lambing abilities and milk production. The Rideau Arcott can produce 100-200 liters of milk per lactation period, and has a 180% lambing rate with the ability to produce lambs in 8-month intervals.

The Rideau Arcott was developed in Canada in the 1960’s and released to farmers in the 1980’s – the main purpose of the breeding program was to create a sheep that was a highly prolific breeder, with excellent milk production and maternal instincts. The Rideau Arcott was bred through the Suffolk, Finish Landrace, East Friesian, Shropshire, and several other breeds of sheep.

This breed can do well in almost any climate. The Rideau Arcott is also kept for both wool and meat, making it a multi-purose breed. The Katahdin is another great dual-purpose breed, producing on average 210 liters of milk per 210 day cycle. Originally bred for their meat, the Katahdin tends to have a wider variation of milk production – some ewes producing significantly more (or significantly less) than the average.

Katahdin regularly give birth to twins and triplets – single births being less common with this breed. Because of the rich milk the Katahdin produces, the ewes can be milked once per day for production, without affecting the growth of the lambs.

One benefit of raising Katahdin is that they have hair instead of wool – meaning there is no need to shear. The Katahdin will shed its hair naturally every year, making it a low-maintenance breed.

Besides milk production, the Katahdin breed is one of the go-to breeds for meat. To learn more about the best sheep breeds for meat, visit my article Sheep For Meat: 10 Best Sheep Breeds for Meat.

If you are still looking for the right fit, there are a few other notable dairy sheep breeds – including the Finnsheep, the Chios, the Sarda, and the Icelandic.

Do you already own a flock of sheep that is not included in these breeds, but that you would like to try milking? Go for it! Any ewe can be milked, and if you have already found a breed that you are particularly fond of, the milk will be an added bonus.

With so many dairy breed options, you are guaranteed to find the right breed of milking sheep for your needs, whether your farm is in wet and humid Florida, dry and hot Arizona, or snowy, cold Wisconsin.

Sheep are one of the most versatile livestock animals when it comes to all they can produce. To learn other ways you can utilize your sheep flock, check out my article What Do Sheep Produce? Ultimate Guide.